A new year, a new blog with DIYfreebies.com's return, Pogo.com and the internet's termination of Java and Flash, and retailrewardsclub.net...

Hi everyone. I know you were not expecting a blog from me but here it is! In a blog post from January 9, 2019, I had said, "There are many more exciting freebie-oriented opportunities and DIY news coming your way this year, so please stay tuned! See you soon, and Happy New Year~!" -- Unfortunately, a lot had happened last year and I just could not find time to write. There hasn't been much in the way of freebie news, so I didn't really have any content to share at the time either. However, I have since found time to write again, and I have decided that my blog may actually help me achieve a similar goal of writing.
For a long time, I have wanted to get my cartoon t.v. series to take off. It was super hard though to just create comic strips and individual drawings to get me noticed. Somebody finally told me, "The best way for you to do this is to write a children's book or make a comic strip. Then you will have something to show the t.v. networks." I think it's best to go the book route because I can sell the books in stores as well as create plush toys of my characters. If the networks see that I have books and plush toys up for sale they might be interested in my work. I received the copyrights back on my cartoon characters two months ago but did not start writing my first book until the end of January. I am eager to finish the first book but I have had writer's block. That is where DIYfreebies.com comes in. See how much I have written already? I think by writing here more often I will break the writer's block streak and finish my book. I'd really like to have five books under my belt. I also would like to update my blog more often. The blogs may not be as long and drawn out as before but they will be something to read.
I wanted to bring up something real quick. I have done extensive research in the past on retailrewardsclub.net but I urge everyone to not do them until I check them out again. The last time I looked into them they were still unresponsive, and there were no payment reports. I think there is a login section now if you create an account unlike before but I still need to check them out.
In other news, I celebrated my birthday this week (February 10!) and hosted a Valentine's Day party tonight. Wellllll, the clock struck midnight, so now it shows the February 15th on this post but it was the 14th the time of the party~! lol... Anyway, I had a good time and so did my guests. I made a three-layer strawberry cake and designed a silver heart in the middle. :)
My cake: 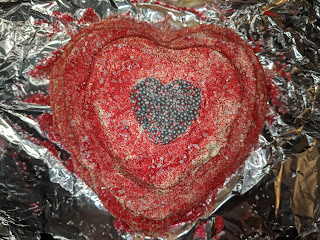 We also played Yahtzee and listened to some cool tunes. Speaking of Yahtzee, I had been playing Yathzee and dominoes before bed on pogo.com. Pogo posted this on their web site: "Java and Flash, two technologies that have powered Pogo games for many years, are being phased out across the internet. Support for Java has already been dropped from most web browsers, and Flash support will be discontinued by 2020. Pogo and EA have no control over this change in web technology.
Because of this, we are retiring the following older Flash-based games from Pogo on March 10, 2020."
They're even getting rid of Monopoly, which I also like, though I do not play it as much as dominoes or Yahtzee. So if Java and Flash are making their exit, what will the world wide web be adopting? This is a big deal. Java and Flash have been around since the stone age. It's getting late and I want to unwind, so I will Google that question tomorrow.
It feels good to be writing again. 2020 feels like a year of change and, hopefully, accomplishment. Perhaps I-Deal will throw out a good site this year or some other DIY company will. I am hopeful. I wish you all well and thank you for reading my blog. I know some of you have been following me for years, and I truly am grateful to my long-time readers as well as any new people who have found me on here.

Take care,
wozniack
Posted by wozniack at 12:03 AM

Hello I hope you are well..

I appreciate your blog over the years

But I sent nearly 20 emails daily to remind them I finished it.. without those emails not sure what would have happened